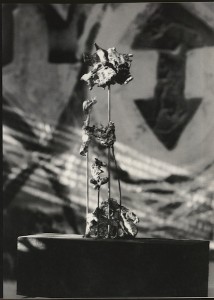 The materials that I selected to develop this project are comprised of images, ephemera, and a map of damage incurred during the uprising. These items and the proposed map will correspond to chapter one of my dissertation, which examines Noah Purifoy’s Signs of Neon sculptures that were created from the drippings of melted neon signs that had been destroyed during the Watts Uprising in 1965. After decades of spatial, political, and economic disenfranchisement, the uprising acted as a catalyst for the improvisatory reimagining of urban space. As works created from the wreckage of the uprising, the sculptures communicate the significance of improvisation as regenerative strategy in Watts, which is further indicated by the the number of cultural centers established in buildings destroyed during the unrest.

In Watts, the linkage of improvisation and the reshaping of urban space extends back to the 1930s and 1940s, when Watts and South Central Los Angeles were home to numerous jazz musicians and clubs. Despite discriminatory laws that sought to segregate different ethnic groups, white Angelenos frequently travelled to South Central and Watts to attend jazz shows. Although police frequently raided these performances, they mark an important moment where the space of the city was reconfigured and the legal speech upholding discrimination was broken by the impromptu integration of black and white Angelenos in their attendance of jazz performances.

At this stage of its development, it is hard for me to know what questions this map will answer that are different from those contained in the written chapter, as well as what their relationship is to each other. What I know with certainty is that the written chapter cannot adequately address or describe these changes while performing the task of analyzing the artworks within the theoretical frame that I have selected. A dynamic (perhaps interactive?) map can offer a sense of the transformation of the built environment over time and demonstrate the changes occurring across multiple sites within Watts in a manner that is more compelling and easily understandable than the same data presented in narrative form.

Theme by Anders Noren — Up ↑